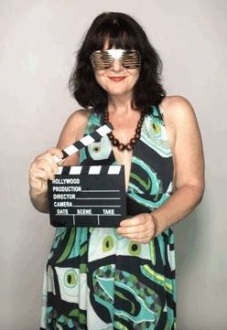 -Off to Paris....Ontario, to shoot an episode of Hotel Paranormal.

-Nicole is over the moon to be flying to Mexico City where she will be shooting a commercial and print ad for Spotify.

-Shot the feature length horror film Godforsaken in Harriston, Ontario.  She plays a principal role in the film.

-Retured to the Toronto Fringe Festival to play Sarah, in the comedic play Sarah and Lucy.

-Performed in the Canadian play The Valley at Theatre Passe Muraille Backspace.

-Appeared in a Manulife commercial.  She played Bonnie who is competing in a game show.

-Shot an exciting ad for Sally Hansen where she appears as a reporter.

~The MDFF short film Scaffold will be making its North American premiere at the 2017 Toronto Intenational Film Festival.  Nicole is excited to be part of this production and plays the role of the homeowner.

~Nicole appeared in an episode of the newly released television series, Bedtime Stories for Men.  She played the role of a Concerned Reader in this comedy series which delves into fantasy worlds.

~Watch for Nicole on Discovery ID in episodes of Fear Thy Neighbor (Pack Mentaility) and See No Evil (All Eyes on Megan).  She is cornering the market on true crime docu-dramas.

~Just shot an episode of Forbidden called Dying for Love.  She plays a concerned Mormon neighbor of a teenager who gets herself mixed up with the wrong guy.  Based on true events.  Watch for this docu-drama on Discovery ID.

~Nicole is over the moon to bring Naked Goddess Productions back to life.  Her first solo producing foray after a long hiatus is the exquisite show Ninety by Joanna Murray-Smith.  She plays Isabel in this intimate two-hander.  It will be part of the 2015 Toronto Fringe Festival.

~Had a great time on set shooting Discovery ID's Web of Lies where she took on the role of a real life mother.

~Played a fertility doctor in Creating Our Families in Scenes from a Fertility Clinic.

~Appeared in Drowning in Wasabi at Tarragon Theatre as part of 2013 Toronto Fringe Fesival.  Check out our great review at http://www.mooneyontheatre.com/2013/07/08/drowning-in-wasabi-actwright-theatre-2013-toronto-fringe-festival/.

~Appeared in Murder Theatre's Murder at the Haunted Mansion.

~Tower will screen at MoMA and Film Society of Lincoln Centre in New York City as part of New Directors/New Films.

~Tower had a limited engagement run at The Royal Theatre in Toronto.

~MDFF's Tower is an official selection of the 2012 Toronto International Film Festival!!!  The press from Switzerland has been very positive and we are excited to make our North American debut in September.

~Nicole took her first swing at doing stand-up comedy at the Comedy Bar.

~The Silence, a short film she shot a year ago has been selected to screen at the 2011 Vancouver Jewish Film Festival as well as appear on Rogers television during Holocaust week.

~The ad Nicole appeared in called Love/Hate won gold at the Bessie Awards.

~Radioactive Drag Queens from the Year 3000 has been chosen as one of NOW magazines critic picks for the 2011 Toronto Fringe Festival.  Check out the review here http://www.nowtoronto.com/stage/listings/listing.cfm?listingid=61706.

~Thrilled to be playing drag queen Celeste in Radioactive Drag Queens from the Year 3000 at the Toronto Fringe Festival.

~Took part in V-Day 2011 performing in the show Any One of Us: Words From Prison, directed by Tanisha Taitt.

~Performed in a murder mystery called Bridesmaids from Hell with Mystery Theatre.

~Wrapped the short film my MOM project, directed by Mars Bazrafshan.  She played a drug addicted, neglectful mother who is trying to change her life for the sake of her daughter.

~In December, she performed in a musical murder mystery called Revenge of the Elves around the greater Toronto area.

~Wrapped a short film called The Silence based on Lily Gluck Lerner's experiences in Auschwitz.  The Silence is an animated short film that celebrates family bonds through tragedy.  This animated production will feature live actors shot in studio, to be incorporated into pre-composed digital backgrounds.

~Shot a Public Service Announcement for Spy Films.  Her role was the fun sponge who is a person that sucks all the fun out of the room.  See it at http://www.youtube.com/watch?v=CpxTWweUX3s.

~Performed in Present Laughter at The Village Playhouse.  For a review of the show go to http://www.insidetoronto.com/whatson-story/56211--present-laughter-brings-laughs-to-the-stage/.

~Starred as Anne in Key for Two at the Village Playhouse.

~Appeared in a video performance piece I Cried for You at Nuit Blanche.  Sixty performers auditioned for Sundance award winning director Julia Loktev throughout the night with the sole purpose of trying to make themselves cry.  The audition was filmed and viewed by a live outdoor audience.