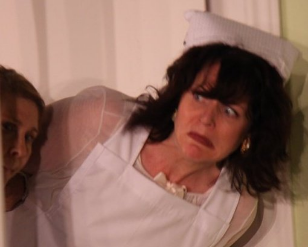 "My favourite part of this show is the chemistry between Fairbairn and Huljak. The actors’ dynamic presence does justice to the close onscreen friendship of Sarah and Lucy."

“Lovely, focused work from this cast on the sensitive, timely subject of mental illness. Fairbairn gives a heart-wrenching performance as Sharon; dealing with her own emotional upheaval, Sharon’s profound desire to do the best she can for her son comes out in bursts of unsolicited advice and talkative cheerleading, pushing her son further into his own world and making her feel even more helpless.”
~Cate McKim, Life with More Cowbell  (The Valley)

“Tender and passionate performances from Fairbairn and MacDonald. Fairbairn’s Isabel is crazy vivacious, sexy and creative – an extrovert who lives life at full speed ahead and loves to tease, playfully torment, even.”

“Murray Smith has written a beautiful and truthful (if loquacious) script played by two robust and tireless actors.”

“.....actress Nicole Fairbairn plays the part with such tenderness and explosive sensuality we are thinking Derek is finally being integrated into reality with a caring and intelligent woman.  Thanks to a tremendous performance by Nicole Fairbairn the movie engages halfway.”

“While the small cast all perform well the two leads, Derek Bogart and Nicole Fairbairn drive the movie with interesting character choices….”

“There are amazing strong women in this show. Fairbairn as Liz was fantastic and kept her composure and sincerity in dealing with Garry's antics.”

“Fairbairn as Anne was the ultimate sidekick.  She held her own in the second act, and her energy was a great addition to the show.”

“Fairbairn’s contribution is another matter altogether. Her performance overflows with raw emotion and inspired eccentricity. She throws her whole body into everything she does, committing herself to portraits of a stoned teenager and a sophisticated married woman with equal fervour.  Fairbairn is almost always very watchable in this production; a more experienced director might have made her riveting.”

“Nicole Fairbairn delivers the best performance of the evening as the troubled Christine. Christine is all about containment and Fairbairn's strength is her subtlety.”

~Colin Thomas, The Georgia Straight (My Sister in this House)

~Jo Ledingham, Vancouver Courier (My Sister in this House)

"[This show is] worth a look just to see the work of the female talent..."

~Leanne Campbell, The Westender (My Sister in this House)

“Nicole Fairbairn’s Stella fares better than many I have seen in a thankless role that often just doesn’t work.  The character’s basic honesty shines through Fairbairn’s portrayal.”